DCU and ILTA are now inviting nominations for the 2010 Jennifer Burke Award for Innovation in Teaching and Learning. The award recognises and rewards innovative practice in Irish Teaching and Learning, and in particular aims to reflect and remember Jenn’s vibrancy, creativity, energy and passion for learning.

Nominations are invited for innovative contributions in the area of teaching and learning, in keeping with the following guidelines:

· Nominations must be for an innovative idea, which must have been implemented.

· You can nominate your own work or someone else’s but, if short-listed, the originator/instigator of the idea must be the presenter/one of the presenters to the final judging panel.

· Your submission will be expected to illustrate/provide examples of how the idea was implemented in teaching and learning, how it was brought to life, and how it impacted learners.

· The nomination can be made in any format, however we encourage you to be creative in the nature of your submission, in how you capture the innovative idea, e.g., your nomination could be in the form of a poem, a sculpture, cartoon, video, etc.

· However, the submission for the nomination must only be a 5-minute capture of the essence of the innovative idea.

· The name of the nominee(s) and the context for their learning innovation idea i.e., college, home, work, etc as well as the name and contact details of the nominator should be included and submitted with the nomination.

On receipt of nominations, all nominations will be reviewed by a short-listing committee, and a short-list of candidates will be selected to be advanced to the final judging panel.

· Marks will be awarded under these headings for submissions.

3. The creativity and quality of the submission
(5 points/25%)

· Email info@ilta.net with your nomination as an attachment or with a link to your submission on the web.

· Nominations to be submitted by Monday 22nd February 2010

· Shortlisted applicants to be notified by week of 29th Mar 2010

· Award to be presented at the Helix , DCU 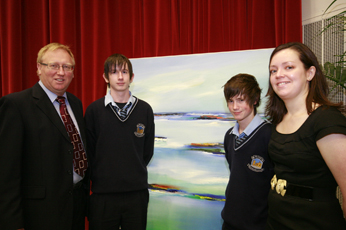 The winners of the inaugural Jennifer Burke award (2009) were the Trinity College Dublin (TCD) Bridge to College (b2c) initiative, submitted by John Lawler on behalf of the b2c team.This initiative aims to provide students from disadvantaged secondary schools with an innovative learning experience facilitated via technology.

ILTA received eighteen entries for the award in 2009, which is co-sponsored with Dublin City University. Finalists were invited to demonstrate their projects to a panel of experts in the Helix Theatre. The presentation format was inspired by the television series ‘Dragon’s Den’.

The 2009 winner received a specially commissioned piece of artwork by by Majella O’Neill Collins which will reside in the award winner’s institution for one year, and a prize that will be retained by the award winner.

Watch the video of the presentation of the inaugural award at EdTech 2009 or read more on the award site.